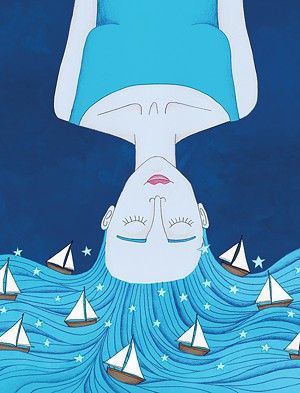 Yoga nidra (or yogic sleep) is a state of consciousness between waking and sleeping, like the "going-to-sleep" stage. It is a state in which the body is completely relaxed, and the practitioner becomes systematically and increasingly aware of the inner world by following a set of verbal instructions. This state of consciousness (yoga nidra) is different from meditation in which concentration on a single focus is required. In yoga nidra the practitioner remains in a state of light withdrawal of the 5 senses with four of his or her senses internalized, that is, withdrawn, and only the hearing still connects to the instructions. The yogic goal of both paths, deep relaxation (yoga nidra) and meditation are the same, a state of meditative consciousness called samadhi.

Yoga nidra is among the deepest possible states of relaxation while still maintaining full consciousness. In lucid dreaming, one is only, or mainly, cognizant of the dream environment, and has little or no awareness of one's actual environment.

The practice of yoga relaxation has been found to reduce tension and anxiety. The autonomic symptoms of high anxiety such as headache, giddiness, chest pain, palpitations, sweating and abdominal pain respond well. It has been used to help soldiers from war cope with post-traumatic stress disorder (PTSD)